I think it’s time to explore some of the more hostile reaches of Alola, with the volcano-dwelling salamander Pokémon, Salandit and Salazzle. Salandit and Salazzle could be based on any of several things, or a mix of all of them, or none of them. Physically they resemble fire belly newts (genus Cynops), a group of newt species native to Japan and southern and eastern China (in the strictest scientific sense, newts are a branch of the salamander family and, compared to other salamanders, remain more aquatic even after leaving their tadpole stage; the words are often used interchangeably though). Fire belly newts are so called for their black colouring with bright red or yellow flame-like markings, which warn predators that they are poisonous and unsafe to eat – so we have a ready-made fusion of the Fire and Poison elements right there. Salamanders also have a very long history of being associated with fire, with stories that they bathe in flames going back at least as far as Aristotle. We could almost stop at that – Salandit and Salazzle are fire salamanders that breathe fire, and they’d hardly be the first Pokémon to come out of “real animal + appropriate-sounding elemental powers” (*cough*Beartic*cough*). But no; there’s more to these crafty amphibians, and as so often in Alola, we can look for answers in the real archipelago of Hawai’i. END_OF_DOCUMENT_TOKEN_TO_BE_REPLACED 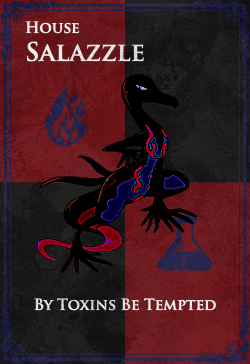 House Salazzle: By Toxins Be Tempted

Isn’t Corrosion such a neat ability?

It certainly is!  Odd that it belongs to Salandit and Salazzle, though; thematically it seems like it should go with a Pokémon like Grimer who has a toxic or corrosive body, whereas functionally it doesn’t seem to make a lot of sense on a Pokémon like Salazzle who seems to be very much more offence than support, from what I can tell so far.

Since the next Captain, Kiawe, is a Fire Pokémon specialist, he lives on a volcano.  Because of course he does.  Fire trainers don’t really ‘do’ subtlety.  Wela Volcano, which is named for the Hawaiian word for heat or burning, and corresponds to Haleakala in the real world, looms over the northeast corner of Akala Island.  Although many of its basalt flows are still glowing red from the last eruption, the volcano is perfectly safe – or at least, this is the claim made by the Seismic Sisters, a set of Alolan triplets who maintain tunnels that provide surprisingly easy access up and down its slopes.  Among the hardy, fire-tolerant Pokémon that live there is a wily black lizard Pokémon called Salandit, a Fire/Poison-type, which nearly blows my Trumbeak out of the sky with Dragon Rage.  I decide to retire my Butterfree and recruit one in her place (a female, which I’m told is important); that Dragon Rage is sure to come in handy as long as we’re still low-level.