Ruby: I was supposed to be ruling the world by now.
Daku: [bored] We know…
Ruby: I was supposed to have achieved ultimate arcane power by shamelessly exploiting magic items with unclear abilities and vague limitations.
Daku: We know…
Ruby: And instead I’m sitting here, freezing my tail off in the middle of some me-forsaken cluster of ramshackle louse-ridden bivouacs clinging to the edge of the world, waiting for a recon report from a Golduck who worships a fossilised mollusc and the world’s stupidest Pidgeot!
Daku: Are you done?
Ruby: And where the hell is the Shelmet?
Daku: That… that is actually a very good question; where the hell is the Shelmet?
Martial: She mentioned meeting with a contact outside the human settlement.  Something about being promised information by a couple of Karrablast.
Ruby: A couple of-? PffffffBAHAHAHAHAHAHAHAHAHAHA
Martial: I fail to see what is so funny.
Ruby: HAHAHAHAHA oh, you will, trust me, just as soon as she gets back, AHAHAHAHAHAHAHAhahahahahaha ha ha ha… ha… ha… ah, we’re still here.  Why.
Martial: Your brother still languishes in prison, witch.  Have you already forgotten your promise to him?
Ruby: What?  No!  No, I mean- just- I mean, of course not!  But this place is a pointless backwater; we should just return to Lumiose City and burn anything that gets in our way.
Martial: We cannot risk the civilian casualties that would ensue if we attacked the city without more information about Team Flare’s activities and plans.
Daku: And we could hardly stay in Laverre City either, after the… spat… that you two had with the Cabal sorcerers.
Ruby: Fine, but we need to take real, serious action, and soon.
Spruce: Hey!  Ruby!
Fisher: We bring news, my lady!
Ruby: …oh good; my day is about to get even more pointless and dreary.
Spruce: You’ll never guess what we just found!
Ruby: [sigh] Let me guess.  A quest.
Spruce: No, A QUE- oh.  Oh, okay, you, uh… you guessed it.
Ruby: Incredible.  Duck.  Explain.
Fisher: Well, my lady, while scouting the entrance to the Frost Cavern north of this settlement, we encountered a Jynx with an interesting proposition…
Ruby: Uh-huh.  And this is her, I take it?  All right; let’s hear it…
Jynx: I grëët yoü, sørceress, in the nåme of öur Møthër Wïnter.  I äm called Brynhildr, ånd I am the læder øf thë rëbel Pøkémon fightïng tø freë the Frost Cavern frøm the tÿrånnical rule of the Abomasnow whöse låir lies in the icÿ hært of our cåve høme.
Ruby: Why- why are you talking like that.  Why do you have a Swedish accent.  You’re not Swedish.  None of us are Swedish.  We’re in France.
Spruce: What’s France?
Jynx: I døn’t knöw whät yoü’re talking abœt; I spæk with a Jynx äccent.
Ruby: [deep breath] Fine.  Whatever.
Spruce: Brynhildr wants us to help free her people from oppression!
Ruby: Uh huh.  What’s in it for us?
Spruce: That’s the best part!  Tell her, Brynhildr!
Brynhildr: The ëvil Abomasnow I åm fightïng to øverthrœw hølds a mægical jëwël of græt pøwer – an Abomasite.   Nöne of mÿ pœple cån use it, but yöür Pidgeot tells më that yoü can.  If yöu’ll ønly joïn thë mercenåry grœüps helpïng üs to fight, it’s yoürs.
Ruby: [stunned] Wha- that- but this is incredible!  It’s beyond my wildest dreams!  I-
Daku: What, because we’ve found another of your sorcerous baubles?
Ruby: No, because Spruce did something useful!
Spruce: I’m helping!
Umbriel: [somewhere in the distance] EEEEEEEEEAAAAAAAARGHHHHHHH!

END_OF_DOCUMENT_TOKEN_TO_BE_REPLACED 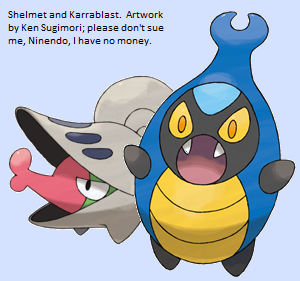 I mentioned recently that it’s been a good year for Bug Pokémon, and it continues to be… well, interesting at least… with these curious specimens: Karrablast, Escavalier, Shelmet and Accelgor.  Shelmet is a fairly unexciting pink snail-like Pokémon that lives inside a helmet and sprays acid when people bother it, and Karrablast is an utterly unremarkable horned beetle that… sprays acid when people bother it.  Things get interesting when we put them together.  When Karrablast and Shelmet are “bathed in an electric-like energy together” (obfuscating Pokédex-speak for “when you trade a Karrablast for a Shelmet”) both of them evolve in a rather unusual way: Karrablast swipes Shelmet’s armour.  END_OF_DOCUMENT_TOKEN_TO_BE_REPLACED