Does everyone remember Zubat?  The blood-sucking, supersonic-screaming, night-flying hell-beasts that used to fill your face whenever you set foot inside a cave in any Pokémon game ever?  You all remember how annoying those things were?

I am not really sure how I feel about what’s been left in their place, however.  Meet Woobat and Swoobat, the new bat Pokémon of Black and White, which I think are supposed to be based on fruit bats, in contrast to the more sinister and evocative vampire bats that inspire Zubat’s design.  I am going to start by acknowledging that, yes, it would be difficult to make a cute cartoon bat – for I believe cuteness was the designers’ aim here – without de-emphasising the traits that make it, y’know, bat-like and emphasising the traits it has in common with other small furry things like flying squirrels, but I have high expectations from the franchise that made a hunk of coral look friggin’ adorable.  I initially labelled Woobat a “blind, buck-toothed airborne Furby,” which should give you a good idea of my first impressions of the thing, and Swoobat is, if that’s possible, even sillier-looking.  I am, however, gradually warming to the idea that Pokémon are allowed to be a bit silly-looking sometimes; they can’t all be badass death machines or graceful paragons of serenity.  Furthermore, in Swoobat’s case I am beginning to think that my first impressions of him may have been unfairly coloured by his in-game sprite, which is awful.  Sugimori’s official art, shown here, is much nicer and while his particular kind of charm doesn’t really appeal to me, I am prepared to concede that Swoobat does have some.  That weird scorpion-looking tail, though, is inexcusable – it seems really out of place on a Pokémon like this, even if it is supposed to form a heart-shape to play into Swoobat’s flavour as a romance-themed Pokémon.  Yes, you heard that right: the Pokédex refers to Swoobat as the “Courting Pokémon” and even bothers to describe its mating habits – don’t worry; there’s nothing graphic.  Apparently, courting male Swoobat emit ultrasonic waves that produce a dizzying high in those affected by them.  This… could be read to have some unfortunate implications, but I’m not going to touch those with a Macedonian sarissa (it’s like a ten-foot pole, but twice as big and with a massive spike on the end).  Regardless, I have to give points for originality in choosing a bat as the basis for a Pokémon with this kind of flavour because it’s certainly interesting.  In short, we’ve had “bat Pokémon” before, but Woobat’s designers seem to have gone out of their way to make it as different from Zubat as possible, and what’s more it actually worked.  I don’t know that I’d call these great Pokémon, but they’re not bad. 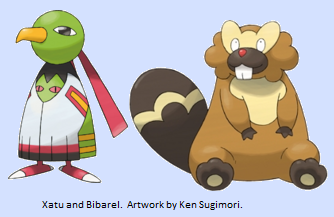 As for Swoobat’s combat skills, well, he’s definitely an odd little beast.  His typing, while not unique, is quite unusual: Psychic/Flying, previously belonging only to Xatu and Lugia.  Swoobat is broadly similar to Xatu in that he’s fast and frail, but with more emphasis on “fast and frail” and weaker attacks.  He also doesn’t have quite as many cool support moves and tricks as Xatu, which is very much the kind of thing that Psychic-types are known for these days, but he does have a fair number of nice things: he can heal himself with Roost, protect his team from attacks with Reflect or Light Screen, screw over defensive Pokémon by using Taunt to force them to make direct attacks, use Knock Off to swat away an opponent’s item, or bounce out of battle while doing damage at the same time with U-Turn.  He’s also one of the fastest Pokémon in the game to learn Endeavour, an attack which sets the target’s health equal to the user’s; obviously this attack requires great speed so that you get a chance to use it after you’ve lost most of your health but before your opponent decides to stab you again.  Unfortunately for Swoobat, he lacks vigour.  He can’t take a hit – at all – and his own attacks are weak.  His speed is all he can fall back on, which isn’t that bad because he is surprisingly fast and speed is typically very beneficial for using support moves, but those paper-thin defences will really hurt, and there are, overall, much better Psychic supporters out there.

What is interesting about Swoobat is the choice of three very unusual passive abilities he gets.  Klutz, formerly held only by the rabbit Pokémon Lopunny, is useless to Swoobat: it renders most items inert in the hands of a Pokémon which has it, which in Lopunny’s case allows her to hold onto dangerous items like a Flame Orb without penalty and then use Switcheroo to swap items with an opponent… but Swoobat can’t learn that attack, making the ability completely pointless.  Swoobat’s other two abilities are shared with the beaver Pokémon Bibarel.  The first, Unaware, could be very powerful but Swoobat’s potential to make use of it seems like it would be even less than Bibarel’s.  A Pokémon which is Unaware ignores all boosts from moves like Swords Dance and Iron Defence given to its opponents’ stats, except for speed.  The obvious application for this is to put a stop to an augmented Pokémon that’s attempting to sweep your team, but since Unaware doesn’t ignore speed boosts, you’ll often have to take a hit first in order to do it.  Bibarel isn’t exactly tough, but he’s not a pushover either; Swoobat is and likely won’t be able to suffer even un-boosted hits, so I’m tentatively going to write off Unaware as well.  The final ability, though, is very intriguing.  Sadly, it’s only available to Swoobat from the Pokémon Dream World, which I don’t think are available yet.  This ability is Simple, which doubles the effect of your own boosts.  Bibarel wasn’t much good at this because he didn’t get a many relevant moves (Amnesia, which is dubious, Curse, which is interesting but not game-changing, and Charge Beam, which, on Bibarel, is very odd).  Swoobat doesn’t have a wide selection either, but what he does have includes Calm Mind, a Psychic technique that raises special attack and special defence simultaneously.  Swoobat might actually make an interesting sweeper with this combination.  Not necessarily a good one, mind you.  He only has one special attack that isn’t resisted by Steel-types (which are very popular indeed): the aforementioned Charge Beam.  That might actually work, though, since Charge Beam, while appallingly weak, does have a high chance of raising your special attack again each time you use it.  Final verdict: not powerful, but interesting, and interesting is good because people don’t expect it.

I was genuinely surprised to find that Swoobat might actually have a use.  Having rare abilities and the potential to actually make use of one of them, as well as belonging to a type combination that isn’t horrendously overdone, are worth quite a lot of points in my book even if the sheer power isn’t there.  And I admit that much of my original annoyance at Swoobat is the fault of whoever did his in-game sprite; he may be pretty silly but I suspect that’s intentional, and he’s a far cry from being a carbon copy of Golbat.  So, much to my own surprise…