These are not Pokémon and I refuse to let them be called Pokémon.

What, you’re going to argue with me? 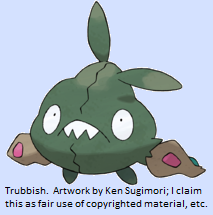 Trubbish and Garbodor are, both figuratively and literally, piles of garbage brought to life by an unholy alchemy taking place in some of the most noxious, stifling refuse pits on Earth (I refer, of course, to the offices of Game Freak’s creature design department).  The Pokédex explains that they live in polluted areas, assimilating rubbish into their bodies, and that they fight with a charming variety of horrid toxins, presumably extracted from said rubbish (however, it also mistakenly refers to them as Pokémon, so I’m not sure we can necessarily take it at its word this time).  I have tried – no, honestly, I have – to find some way in which these P- P- *ahem* potatoes are conceptually distinct from Grimer and Muk, and I have failed.   Both are effectively the personification of environmental pollution caused by the industrialisation and increased urbanisation of human settlements, and both were created from the waste products of said urbanisation by a vaguely-defined pseudoscientific phenomenon: in Trubbish’s case, an unspecified chemical reaction between garden-variety trash and industrial waste, in Grimer’s, the reaction of toxic sludge to (and I quote) “X-rays from the moon.”  Both of them are also ridiculously toxic and could probably drop an Indian elephant at fifty paces just by standing upwind.  The only difference I can pick out is that Garbodor looks unbelievably stupid.  Trubbish… eh… considering that the concept they had to work with was “ambulatory garbage bag” I think it’s quite an achievement that Trubbish is as tolerable as he is, but Garbodor is like a master’s thesis in idiocy; he may well be more stupid-looking than any Pokémon I’ve ever seen.

Yes, excluding that one, obviously.

Oh, all right, and that one.

Well, of course he’s not as bad as that one; that bloody well goes without saying, doesn’t it?

The point is, Garbodor is definitely in the top ten – or would be if he were a Pokémon, which he’s not.  That gormless expression, the arms held together by bits of pipe, the puffy ear-tuft-things atop what he so pretentiously calls his head, the trailing strips of green plastic draped over him like a cape, the indefinable blue and pink lumps that festoon his body… nothing about this P- this polyhedron makes me want to let him continue to suffer the pain of his misshapen existence, let alone actually make him my partner.  I don’t know that he’s even properly repulsive; I’m not completely sure that the art style of Pokémon allows for that.  He just looks dumb. 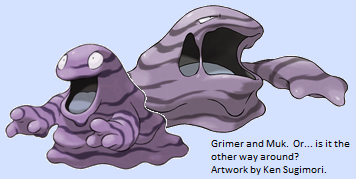 I’m not normally one to use a Pokémon whose flavour I truly despise, even if I’m happy to concede it has potential merit in some role or other.  I readily admit, for instance, that although personally I can’t stand Weezing (Koffing I don’t mind; Koffing I like, but Weezing I hate) he’s undeniably an effective and unusual physical wall.  I say this in order to defend my integrity as I come to talk about Garbodor’s powers and abilities, so that my readers know I went into this with an open mind, fully intending to find a use for him if one existed.  The fact that I failed is as much his fault as mine.  Garbodor truly is dreadful.  I think I’ve mentioned in the past that one thing I like about Black and White is that few, if any, of the new Pokémon from these games are actually unusable, but Garbodor is pretty bad.  His stats are average, his movepool is utter drivel, his type is unremarkable and his abilities are, at best, situational.  Did I miss anything?  No, I think that covers it.  Poison is probably the worst offensive type in the game, being strong against only one other type – Grass – but not bad defensively, with only two weaknesses (Ground and Psychic) and four resistances.  Still, there’s something of a trend that the most effective Poison Pokémon are generally those that have managed to rid themselves of that weakness to Ground attacks somehow, like Weezing, Gengar and Crobat, because it really does hurt.  That’s not Garbodor’s biggest problem, though; his biggest problem is that his slate of useful attacks is extraordinarily limited.  He has some good special attacks, like Thunderbolt and Psychic, but that doesn’t help because he’s no good at using special attacks.  I’m pretty sure the only physical attacks he has that are worth using are Body Slam (which is good because it causes paralysis, and is therefore largely incompatible with Garbodor’s general desire to spread poison), Payback (which is best on a very slow Pokémon, and Garbodor’s not far below average in that department), Gunk Shot (which only hits 70% of the time and is therefore of dubious value) and Explosion (which has certain obvious issues as a go-to move).  Garbodor’s biggest strength is his physical attack stat and he doesn’t even have a reliable physical attack of his own element!  Was Poison Jab really too much?  Would that have sent him over the edge and made him hopelessly overpowered?  Seriously? 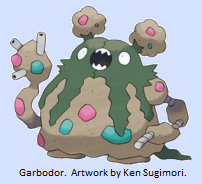 …okay.   Accentuate the positive.  I can do this.  Garbodor can learn Spikes (opponents that can’t fly take damage when switching in) and Toxic Spikes (opponents that can’t fly are poisoned when switching in), and given a few turns to set those up he has the potential to make switching in and out of battle hell for an opponent who doesn’t have a Pokémon with Rapid Spin handy to blow away the layer of junk Garbodor scatters wherever he goes.  What’s more, one of his passive abilities, Weak Armour, might actually have a use here – whenever a Garbodor with Weak Armour takes damage, his defence weakens, but he gets faster, and if that makes him faster than his opponent, it will give him time to toss down an extra layer of Spikes or Toxic Spikes before being killed, or just to blow himself the hell up and take his foe with him (his other ability options, Stench and Aftermath, are fairly silly, but reasonable alternatives if you don’t want him taking more damage from every successive attack).  Unlike many Pokémon with Spikes and Toxic Spikes, Garbodor actually has a little bit of bulk to him (he’s no Forretress, but this is all he’s got, so work with him here) so he might be able to pull this off reasonably well.  Heaven knows what else you’d use him for; he’s one of the least effective P- Pok- pomegranates I’ve seen since starting this mad endeavour.

What, you want a conclusion?  No, go away; I’ve been through enough on this idiot’s account.

Oh, to Hades with it!  From garbage they were born; to garbage let them return!