I need to be up-front with you about this one.  I really like Tirtouga and Carracosta.  These turtle Pokémon are two of the fossil species of Black and White (the other two are Archen and Archeops, whom I talked about ages ago and allowed to live – perhaps a little generously) and the latest in a long line of prehistoric Pokémon resurrected by the miracle of SCIENCE.  I think the artistic designs for Tirtouga and Carracosta are superb; Tirtouga is cute but also clearly strong enough to take care of himself, and Carracosta practically dares you to try attacking him.  Both channel the “ancient” quality fossil Pokémon are supposed to possess exceptionally well.  As well as having typical sea turtle qualities, like being able to safely dive to tremendous depths, they seem to be part-way through evolution into terrestrial turtles and can hunt prey on land as well.  They’re also absurdly strong – Carracosta can chew up steel beams and punch through the hulls of large ships with a smack from his fin.  In short, Tirtouga and Carracosta are awesome.  This, however, is the point at which I must reluctantly remember that I’m supposed to be trimming the fat by eliminating unnecessary Pokémon and ask myself: did we need more turtle Pokémon? 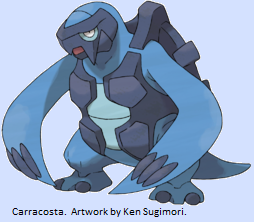 You all know Squirtle, Wartortle and Blastoise, of course; heck, their position as the original Water starters has ensured that a lot of people who never played Pokémon at all know them.  They’re not the only turtle/tortoise Pokémon, though – and actually, Game Freak have done some interesting things with the idea in the past.  Water was the obvious choice of element for a turtle, but Torkoal from Ruby and Sapphire went in the opposite direction: he’s Fire-type that lives in the mountains and digs for coal to burn in his internal furnace.  Turtwig, Grotle and Torterra, the Grass-type starters of Diamond and Pearl, support saplings, bushes and eventually entire trees on their backs, drawing inspiration from the “world turtle” of Hindu mythology (or, alternatively, of Terry Pratchett’s Discworld series).  Tirtouga and Carracosta are really only notable in that they’re the first Pokémon to be based on sea turtles rather than tortoises – Squirtle and friends may be Water-types but they’re clearly better adapted to life on land than Tirtouga.  The interesting point this raises, though, is that Carracosta is probably the ancestor of at least Blastoise, if not all of these Pokémon, in just the same way as Archeops is explicitly said to be the ancestor of all bird Pokémon.  Because of that, their concepts, despite not being anything outstanding in themselves, could at least go somewhere if Game Freak were so inclined.  Sadly, we know they’re not, which is a great pity because I would like to know more about the relationship between Carracosta and Archeops and their descendants – something that doesn’t come through much in the designs of all the previous fossil Pokémon, since they seem to come from lineages that have either died out completely or changed beyond recognition.  If Pokémon were being run differently, there would be a lot of potential in developing that relationship, but that’s never likely to be realised.

In much the same way as Carracosta has to deal with being the latest in a long line of fossil Pokémon and the latest of four turtle Pokémon, he’s also stuck with being the fifth Pokémon of his type combination: Water/Rock (it’s also worth bringing up that two of the previous Water/Rock dual-types, Omastar and Kabutops, were fossil Pokémon as well, and another, Relicanth, was based on the coelacanth, a so-called “living fossil”).  The good news is that of those four, Corsola was a lot of fun but also depressingly bad, Omastar and Relicanth were usable but nothing special, and Kabutops was strong but operated rather differently to Carracosta.  He’s basically a big physical tank, whose ability to take physical hits is sadly hampered by Rock/Water’s multiple common weaknesses (and a horrid double-weakness to Grass).  In that respect he’s much like Relicanth; Relicanth is a good sight tougher and faster (but still slow), but has significantly weaker offensive capabilities and a narrower movepool: his main selling-point is Head Smash, a fantastically powerful Rock attack that causes terrible recoil damage – recoil damage that is negated entirely by his Rock Head trait.  Carracosta’s passive skills are less useful; Solid Rock reduces damage from super-effective attacks by 25% (helpful but not amazing) while Sturdy ensures that, if he’s at full health, he will always survive any attack with at least one hit point left (generally a powerful ability, but outside of Grass attacks there’s really relatively little that can one-shot Carracosta anyway).  There are three standout techniques, though, that allow Carracosta to take full advantage of his superior offensive power.  Curse simultaneously boosts his already excellent attack and defence at the cost of his speed, which was never anything to boast of anyway, and makes for a good combination with Aqua Jet, the Water-type equivalent to Quick Attack, which Carracosta can use to strike first when he really needs to.  The third thing Carracosta has that Relicanth doesn’t is Shell Smash.  If you’ve read my entry on Crustle, or ever seen this move in action, you already know that it’s extremely dangerous.  In brief, it allows a Pokémon to change gears completely, from a slow, defensive tank to a fast, devastating sweeper.  Not only that, its bonuses apply to both physical and energy damage, allowing Carracosta to exploit his less obvious advantage over Relicanth: a decent special attack score.  You probably still want physical attacks to be the focus of any moveset for Carracosta but the ability to mix things up with Surf, Ice Beam or Focus Blast makes him much more unpredictable and therefore harder to defend against than he otherwise would be.  Carracosta’s not a totally game-changing Pokémon but he can do terrible, terrible things to an unprepared team if you’re clever about it.

So, here’s the million-dollar question: do I let Tirtouga and Carracosta live or not?  I love their flavour, but although it’s well-done it’s not especially unique.  They’re clearly powerful, but I’m reasonably sure that if Game Freak had really wanted to they could have made Relicanth just as strong by giving him some new moves to play with.  What I’m saying is, if they had been introduced years ago when there were fewer Pokémon around to begin with, I would have unequivocally welcomed Tirtouga and Carracosta with open arms, but today I have to wonder whether they’re really necessary…

Screw it.  They’re awesome.  I like Relicanth too but I’d rather have Carracosta any day.