Ice is one of the more underrepresented elements in Pokémon: the original games had only five Ice-types (Articuno, Jynx, Dewgong, Lapras and Cloyster), single-typed Ice Pokémon didn’t exist until Snorunt, Glalie and Regice in Ruby and Sapphire, and even now, with more than six hundred Pokémon in the game, fewer than thirty of them are Ice-types.  Black and White have made two valiant efforts already to expand the number of pure Ice-types but have failed to impress me, producing Beartic and Vanilluxe.  Well, third time’s the charm, so they say, so let’s have a look at Cryogonal, the crystallising Pokémon.

Enigmatic Pokémon that form in high snow clouds, Cryogonal are difficult to track down because of the unusual properties of their icy bodies: when the temperature rises above a certain point, a Cryogonal literally vaporises, becoming invisible and insubstantial until its surroundings grow cold enough for it to recrystallise.  This is a unique and fascinating trait which is unfortunately very difficult to represent in-game; the designers have tried their best by giving Cryogonal the Acid Armour technique, which normally denotes the ability to melt into water or otherwise liquefy one’s own body structure, but it’s not really what Cryogonal does and unfortunately the move’s effects don’t really play to its strengths (more on that later).  Cryogonal’s other notable power is its ability to ensnare targets in chains of ice crystals.  It can do this in-game by using Bind, which (to be fair) is not the worst move in the game but comes a close third to Splash and Constrict.  This is another of those things I keep harping on about: Cryogonal isn’t actually good at the things which make it interesting and which it’s supposed to be good at.  To its credit, the snowflake design is appropriate and the symmetry is pleasing, but the face is odd.  What Sugimori’s official art doesn’t show is the ‘moustache’ of icy bubbles trailing from Cryogonal’s face, which you can see in the in-game sprite (they look just like the four bubbles you can see in its ‘mouth’, so imagine six more of those styled like a Fu Manchu).  I guess these are the “chains” that Cryogonal uses to bind its prey but they just come across as an annoyingly human facial feature on a blatantly inhuman Pokémon.  The anger in its eyes seems bizarre for the same reason.  What we have before us is a genderless Pokémon, composed entirely of ice, with an utterly alien biology, that spends half of its waking life as an evanescent vapour.  There is no reason in this world to make it look human.  None.  It simply undermines the strengths the design actually does achieve. 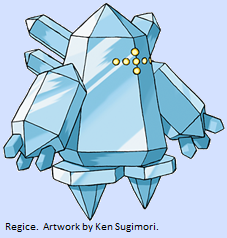 As aesthetically, so mechanically: Cryogonal is one weird Pokémon.  Its impeccable special defence stat allows it to absorb most energy attacks like they’re nothing, but its icy body will shatter when struck by all but the weakest physical attacks.  It is cursed with unalloyed Ice typing, bearing no resistances and multiple crippling weaknesses, but at least enjoys immunity to Ground attacks thanks to its Levitate ability.  It’s very fast and can hit reasonably hard with special attacks, but learns no special attacks to speak of besides Flash Cannon and Ice Beam.  Its pool of support moves is not large, but contains some real gems.  Recover might be enough to make it just barely usable as a defensive Pokémon, which is quite an achievement for an Ice-type.  I wouldn’t use Cryogonal just for its aptitude at soaking energy attacks, however, because Regice is better at it even without Recover, doesn’t die instantly to all physical attacks and can learn Thunderbolt to compliment its Ice Beams (yes, Regice is a legendary Pokémon but not all are created equal; if anyone complains, you can tell them from me that there’s nothing overpowered about Regice… at all).  This is why Acid Armour, which is as close as Cryogonal gets to a signature move, isn’t a particularly good idea; sure, it’ll make it much better at taking physical attacks but it still won’t actually be happy about it (and it still won’t be as tough as Regice either).  A halfway decent physical attacker will still force it to switch out and it’ll lose the effects of Acid Armour and be back to square one.  Cryogonal will never be a tank, so don’t even try.  Its energy resistance should really be used to gain opportunities to make use of its support techniques.  Reflect is a decent one; it’ll dampen physical attacks just as Acid Armour will but will also persist and protect your other Pokémon after Cryogonal is inevitably forced out, which a lot of Pokémon will appreciate.  Cryogonal gets Light Screen too, so it can protect its team from special attacks as well.  The bad news is that there are dozens of Pokémon that can do this, many of them have the same basic strengths as Cryogonal, and it’s far from the best.  It’s also far from the worst but let’s face it, being better than Ledian is not something to be proud of. 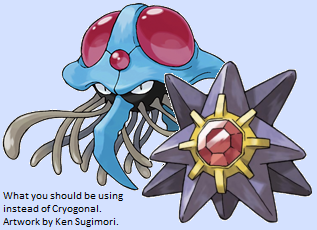 If you really intend to use this thing (and gods help you if you do), there’s only one task for which I can honestly recommend it and that’s using Rapid Spin because that’s the one thing at which it arguably isn’t directly outclassed by other Pokémon.  Everyone needs a Rapid Spinner because it allows you to get rid of Spikes, Toxic Spikes and Stealth Rocks laid by your opponents, which will otherwise damage (or poison) your Pokémon every time you switch.  As important as Rapid Spin is, however, only a few Pokémon can actually do it, which ensures that anyone who can is worth at least a backwards glance (well… except for Delibird).  Cryogonal’s dubious claim to fame is that it has greater special defensive potential than any other Rapid Spinner, narrowly beating out Tentacruel.  It’s also the second-fastest after Starmie, and suffers no harm from Spikes or Toxic Spikes by virtue of Levitate.  Unfortunately for Cryogonal, it is vulnerable to Stealth Rock – dangerously so, because Stealth Rock damage, unlike Spikes damage, scales with a Pokémon’s weakness to Rock attacks – and is markedly inferior to Starmie in a number of other respects (to put it briefly Starmie can actually fight).  One or two other things about Cryogonal’s movepool are vaguely amusing but don’t really help anything other than my case against Game Freak’s designers.  It learns Sharpen, which increases a Pokémon’s attack stat, and is indeed the only Pokémon besides Porygon to do so, but its attack stat is appalling and its physical movepool even worse than its special movepool.  It learns Confuse Ray and Haze, but those are of dubious utility at best.  It even learns Solarbeam, which is actually a really good fit for Cryogonal’s flavour and would have won it major points if Game Freak had made it work, but Solarbeam is only useful if you can skip the charge-up turn by setting up Sunny Day, and Cryogonal hates Sunny Day because it makes Fire attacks stronger (and can’t learn it anyway).

Cryogonal isn’t the most incompetent Pokémon in the world.  It’s certainly not the most incompetent Ice Pokémon in the world.  Heck, it arguably isn’t even the most incompetent single-typed Ice Pokémon in the world (Glalie is pretty bad).  It is terrible though.  I discussed Cryogonal at some length with a friend, and this is the ability we would give it in place of Levitate to fix it.  It’s right there, Game Freak; take it or leave it.
Vapour Armour: While Sunny Day is in effect, Cryogonal takes no damage from physical attacks.
This ability is deliberately very strong; it would improve Cryogonal’s performance in all areas by forcing opponents to target its brilliant special defence, and improve its offensive coverage by encouraging it to use Solarbeam.  It might well be too strong in Black and White since Ninetales now creates a permanent Sunny Day effect just by switching in, but do bear in mind that Tyranitar, Politoed and Abomasnow, who can create different weather conditions in the same way, would utterly ruin Cryogonal’s day.  I’d still be tempted to pare down its special defence and maybe its speed if I gave it something so powerful; opinions on this are welcome.  Anyway…

I hereby deny this Pokémon’s right to exist!  Let it be reduced to vapour and dispersed on the four winds!