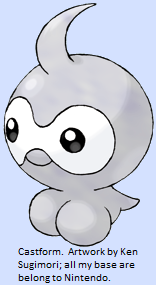 Much as Delibird was (I believe) the best-designed Pokémon in my Top Ten, Castform is arguably the strongest (and if that doesn’t send shivers down your spine, nothing will).  Introduced in Ruby and Sapphire, Castform is a Pokémon created by Hoenn’s Weather Institute to serve a very specific purpose: predicting and manipulating the weather.  To this end, he possesses a unique ability that is his claim to fame: Forecast.  In calm, overcast weather, Castform is a wholly unremarkable Normal-type, but Forecast causes his form and element to change with the weather; he becomes a Water-type in heavy rain, an Ice-type in snow or hail and a Fire-type under clear skies.  His signature move, Weather Ball, changes too; giving him an excellent Water, Ice or Fire attack as appropriate (the Water and Fire versions of Weather Ball also get power boosts from the routine effects of rain and sun, respectively, becoming very strong indeed); it can also become a Rock attack in a sandstorm, but Castform himself lacks a form for that weather condition, so the attack itself will be weaker and Castform will have to expose himself to sandstorm damage in order to use it.  Weather Ball, Forecast and his wide selection of other special attacks make it relatively easy to tailor Castform for use on a rain, sun or hail team, but I don’t think he has the defensive bulk to pull off the set Game Freak probably had in mind when they created him: [Weather Ball – Sunny Day – Rain Dance – Hail], switching between weather conditions and forms as appropriate.  Probably better to stick with just one, and supplement Weather Ball with Thunder (if you’re using rain), Thunderbolt (if you aren’t), Solarbeam (if you’re using sun), Energy Ball (if you aren’t), Fire Blast, Scald, Ice Beam, or Shadow Ball.  Like I said, Castform has a lot of choice; he’s unlikely to get far as anything other than a special-attacking weather controller, but the diversity he can manage within that role is surprisingly impressive. 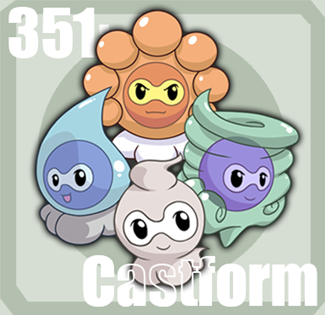 Now, don’t get me wrong; Castform is bad.  He’s fairly slow, relatively frail and, unless he can score a super-effective hit, unlikely to do much damage with anything besides a sun- or rain-boosted Weather Ball.  However, he’s only garden-variety bad, not gouge-out-your-own-eyeballs bad.  Unlike Delibird, you can actually use Castform in a variety of roles.  He’ll be outclassed in just about all of them, and by his very nature he’s actually more vulnerable to other Pokémon that like to mess with the weather, such as Politoed and Ninetales, but he’s also capable of putting on a respectable performance now and again.  Why, then, am I spending this entry talking about Castform instead of one of the many Pokémon out there who are even more horrible?  Well, truth be known, I have long regarded him as one of the blandest Pokémon in existence.  In order to be totally fair to Castform, I must point readers to the relevant instalment of George Hutcheon’s BulbaNews column, On the Origin of Species (http://bulbanews.bulbagarden.net/wiki/On_the_Origin_of_Species:_Castform – seriously, go read it; it’s not long), which traces the poufy, grey-white Castform we know to a traditional Japanese weather-charm called a teruteru bozu (‘sunshine monk’).  In principle this is a perfectly solid idea, but I’m still inclined to say that it’s been handled poorly.  Aside from the weather manipulation idea, which was the whole point, the only thing Castform takes from the teruteru bozu is the most boring thing about them: their physical appearance.  Why would you create a Pokémon in imitation of an entirely nondescript doll made of white tissue paper?  If it had been my work, I’d say that the dull appearance was a necessary evil to get at the interesting stuff – the folktales and customs behind these things.  However, not only does the traditional lore associated with teruteru bozu have no impact on Castform’s design whatsoever (the Pokédex just repeats “Castform’s appearance changes with the weather” ad nauseam), Game Freak have managed to lock themselves out of using those ideas in future by declaring that Castform was an artificial Pokémon created by the Weather Institute – a glorified barometer, not something that could ever have had any impact on Hoenn’s cultural development or mythology.  So, with respect to George Hutcheon, I still think Castform is a terrible idea!
All right, money where my mouth is and all that… if I’m so clever, how would I have changed Castform?  Well, as you may have guessed, my first move would be to retcon that idiocy about Castform being a creation of the Hoenn Weather Institute, because that doesn’t make sense anyway.  Why would a bunch of meteorologists have the expertise to create a new Pokémon?  Having a bunch of Castform in the Institute for research purposes I could buy, but creating them from scratch has got to be ridiculously high-level genetics.  Now, if you’ll excuse me, I’m going to read up on where teruteru bozu come from, culturally speaking, and try to rewrite Castform based on that… 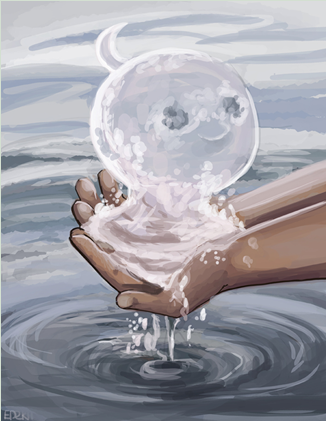 …okay.  Got it.  So, Castform.  Castform have the ability to draw atmospheric water into themselves or expel water back into the air, allowing them to summon or banish clouds within a small area.  They can also break down pollutants and purify the water they absorb.  Castform use their powers to regulate weather patterns and encourage the plants they eat to grow tall and produce lots of berries.  Because they cannot create rain, only move it around, they normally travel a great deal to manage the climate of larger regions, drawing water away from places with too much rain and bringing it to drier areas.  Their passage is welcomed by humans, who offer Castform gifts and treats to entice them to return often, because villages in Castform’s territory nearly always enjoy successful harvests.  However, if Castform are attacked or insulted, they may strike back by causing droughts, or even by freezing rainclouds to create hailstorms.
Mechanically speaking, Castform is just about the only Pokémon on this list that I think could be made to work without evolving it; you could probably make him at least usable by tacking a couple of rider effects onto Forecast – I’d say first, that as long as Castform is actually on the field, he has absolute control of the weather and all other Pokémon attempting to change it will fail (so Tyranitar, Hippowdon and Politoed can no longer block Castform’s Solarbeam just by switching in), and second, that all of Castform’s weather effects are permanent until overridden, like the effects created by the Drought and Drizzle abilities.  Of course, you could also evolve Castform to rid us of his tissue-paper-doll blandness (bearing in mind that those changes to Forecast might well be too much if Castform actually had good stats to back them up; I might still make the first change, but I think I would leave the second).  Actually I’d be tempted to evolve him into a Dragon or pseudo-dragon, a la Gyarados, given the associations dragons have with rivers and water in Asian myth, and the appearance of dragons in Japanese weather stories.  Alternatively, he could shift further towards a humanoid design, to reflect the idea of itinerant weather-priests that made me suggest Castform should be a habitual wanderer; this also allows us to keep closer to the teruteru bozu that originally inspired Castform’s appearance (at the moment I’m thinking of an ethereal figure somewhat like Gardevoir).  Either of these ideas could be combined with an evolutionary split like Eevee’s, into forms that specialise in sun, rain and hail, carrying the Drought, Drizzle and Snow Warning abilities for automatic and permanent weather effects.  Part of me wants to keep Forecast on any evolution that Castform gains because it’s so much the core of his design, however, the split evolution would allow me to rewrite Forecast as I suggested without concern for making it overpowered, while his newfound “not fully evolved” status would give Castform himself the option to buff his meagre defences by holding an Eviolite.  Between Forecast and an Eviolite, Castform might actually be able to hold his own even against his more powerful evolutions (much as, for instance, Chansey can fulfil certain specialised roles more effectively than Blissey).
It could be argued that I’m inherently prejudiced against Castform because of my flagrant ignorance of Japanese culture, and that would probably be fair.  The thing is, though… nothing about Castform suggests that that’s where his origins lie; it’s almost like the designers wanted it to be an inside joke, or something, and once he’s stripped of those cultural associations, there’s nothing left.  He’s just a greyish-white blob that can turn into a cartoon sun, a raindrop, or a snowcloud.  Given the sheer prominence of weather-manipulation in Ruby and Sapphire, with the advent of Groudon and Kyogre, I would have thought that putting slightly more effort into making Castform interesting was a no-brainer; this little guy should by all rights be one of the flagship Pokémon of those games, not the barely-used gimmick he is.