Okay, guys, today we’re looking at the last Pokémon that has yet to be officially revealed by Nintendo: a killing machine of unfathomable power, created from the genetic material of an ancient Pokémon by an evil mastermind in order to create the most powerful of all-

Okay, sure, there are differences.  Genesect was the brainchild of Team Plasma (and presumably of their de facto leader, Ghetsis), the villains of Black and White, who enhanced the deadly prehistoric insect with metal armour and a devastating portable photon cannon, while Mewtwo, who was commissioned by Team Rocket’s shadowy master Giovanni, gained his incredible psychic abilities courtesy of a truly frightening amount of gene splicing (although, in the TV show, Giovanni does also equip him with a suit of armour designed to focus and augment his powers).  Also, it seems pretty clear that Genesect was always a vicious hunter even before Team Plasma got to it, whereas Mewtwo’s predecessor, Mew, is one of the most peaceful and carefree Pokémon you’ll ever find.  As I alluded earlier, though, the similarities are striking, to say the least.  The Genesect project was actually shut down, since Team Plasma’s spiritual leader, N, held a very different attitude towards Pokémon to Giovanni’s; specifically, N believes that Pokémon are perfect beings, and came to the conclusion that the technological enhancements made to Genesect by his scientists were a corruption of its natural purity.  The lab where Genesect was developed was not abandoned, though; a couple of scientists continued to haunt the place and eventually brought their creation to a state resembling completion.  Thus we have Genesect, and… well, I know this is a cheap shot and even thinking something so blatantly subjective makes me feel dirty inside, but it doesn’t look like a Pokémon, damnit!  The robotic enhancements made to Genesect have taken over it so completely that it almost has more in common with the mecha subgenre of anime than with the rest of Pokémon; even the more robotic-looking Steel-types like Magneton have a very stylized appearance that helps them to fit in with the organic crowd.  And really, Game Freak… you gave it a photon cannon?  Really?  I mean, okay, Blastoise’s water cannons are a precedent of sorts, but the whole thing is so outrageously science fiction that it becomes jarring.  Come to think of it, since when did Team Plasma have that kind of technology anyway?  Why wouldn’t they use it themselves; why graft it onto a Pokémon?  Why haven’t we heard that humans have directed energy weapons and why doesn’t that come up more often?  What happens to the noble discipline of Pokémon training when science has created weapons that can emulate a Pokémon’s strongest attacks?  I’m sure the answers to all of these questions would be really interesting if the designers actually intended for us to be asking them!

Just as you might expect from a unique Pokémon augmented by all kinds of wonderfully absurd cybernetics, Genesect is pretty damn strong.  As a Bug/Steel dual-type, it has only one weakness (Fire) and a bucketload of resistances.  For a legendary Pokémon its defences are disappointing, although it’s no pushover, and it’s fast but not amazingly so.  Genesect’s big draw is its combination of powerful physical attacks with powerful energy attacks – plenty of Pokémon can do more damage with one or the other, but very few can match Genesect with both, and just as few defensive Pokémon are comfortable with standing up to both (the classic examples are Blissey and Skarmory; Blissey hates all physical attacks but ignores special attacks, while Skarmory loathes special attacks but doesn’t mind most physical attacks – Genesect can crush both of them).  Its Download ability synergises perfectly with this kind of role, giving it a boost to either physical or energy damage when it switches in based on what will work best against its opponent (so, switch it into Blissey and its physical attacks will be strengthened).  The sad thing is that Genesect has few noteworthy physical attacks; besides its Bug techniques, X-Scissor and U-Turn, all it’s really got are Shadow Claw, which is a bit weak and doesn’t score many super-effective hits, and Explosion, which is not exactly the most practical move in the game (but still definitely worth consideration; if you find yourself in a position where you wouldn’t mind losing your Genesect, Explosion could be a lifesaver).  Just one good attack is enough, though, to take out the Pokémon that only invest in their special defence and have to rely on resistances to take physical damage.  What’s more, its elemental techniques are absurdly varied, including Bug Buzz and Flash Cannon from its own types (I wouldn’t use either of these, incidentally; X-Scissor means that you already have a good source of Bug-type damage, and Steel is a notoriously bad attacking type – Genesect’s other options are more interesting), as well as Flamethrower, Thunderbolt, Ice Beam, Energy Ball, Tri-Attack… and Techno Blast. 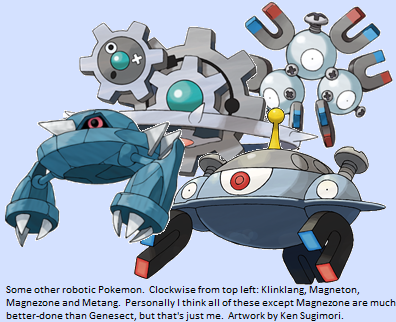 Techno Blast is Genesect’s signature move.  Game Freak clearly put a great deal of thought into it, and it is therefore unbelievably stupid.  It works as follows: Genesect can be given one of four items to hold, little compact disks to be slotted into his photon cannon, known as the Douse Drive, Chill Drive, Burn Drive and Shock Drive (you can see which one it’s using by looking at the colour of the little light on the side of the cannon).  Giving it a disk will change the element of Techno Blast from Normal to Water, Ice, Fire or Electric.  In theory, this is a pretty cool and interesting idea.  In practice, Flamethrower, Thunderbolt, Ice Beam and Tri-Attack completely outclass the Fire, Electric, Ice, and Normal versions of Techno Blast; they do more damage, you can use them more often, and they will occasionally burn, paralyze or freeze their targets in addition to doing damage.  What’s more, since TMs are reusable in Black and White, switching between Flamethrower, Thunderbolt and Ice Beam is just as easy as switching between the different varieties of Techno Blast.  As a result, the only one you should even consider using, ever, is the Water one, because Genesect can’t learn any Water attacks.  Water is useful because it’s difficult to resist, so it’s really good on defensive Pokémon that want to get by on just one or two attacks.  On an all-offensive Pokémon with a wide variety of powerful techniques to choose from, the possibility of a Water attack is much less intriguing.  It certainly isn’t worth having to give Genesect a Douse Drive in place of a more useful item like a Life Orb or Choice Scarf.  Techno Blast was clearly supposed to be a clever and useful toy to make Genesect stronger and more fun.  It’s not; it’s a highly impractical gimmick that exposes the designers’ total lack of comprehension of their own game system.

As I keep saying, I think that legendary Pokémon are here to provide material for interesting stories, and that this is the light in which we should view them.  Genesect… well, Genesect is Mewtwo Two, or Mewthree, if you will; the most important point of difference is that Mewtwo could understand what he was and how he came to exist, while Genesect (probably) can’t.  I don’t see what new potential this opens up.  Add to that my general irritation at Genesect’s cyborg features and the blatant lack of thought that went into the abject stupidity that is Techno Blast, and I just want someone to be punished for the creation of this thing, and since both Team Plasma and Nintendo are out of my reach, I’ll just have to take it out on poor Genesect itself.

I hereby deny this Pokémon’s right to exist!  Let it be mounted on a pedestal outside Nintendo’s headquarters as a monument to the glory of Science!

One thought on “Genesect”