All right!  One hundred and fifty-five down, one to go!  I can do this!  Yeah!  Go me!  I’m awesome!  Now, let’s wrap this up, with Unova’s last remaining legendary Pokémon: the glacial Dragon-type Kyurem!

Kyurem is a mysterious and powerful Dragon Pokémon who lives hidden in a crater known as the Giant Chasm, near Lacunosa Town in north-eastern Unova.  The people of Lacunosa Town don’t know what lives in the Chasm, but they regard it as a place of ill omen and are afraid to go near it.  The town is surrounded by a wall to keep out whatever lives there, and the people of the town normally stay inside their homes at night, since old legends warn of a monster that fell from the sky long ago and takes away people and Pokémon at night to eat them.  Their fear is understandable; Kyurem’s hard, almost skeletal visage is not a welcoming sight.  As far as I can make out, though, he just wants to lurk in his dark cave at the back of his meteor crater and be left alone.  The information we have on Kyurem from the Pokédex seems to suggest that he’s unwell – maybe sick, injured, or just plain old – and can’t control his own ice powers properly anymore.  His own body has long since been frozen by his own chilling aura, leaving him a shadow of his former self.  So, what was his former self like?  The air is thick with speculation.  It is agreed, almost universally, that Kyurem completes a trio with the black and white dragons, Zekrom and Reshiram, and will probably be the mascot of the third game Nintendo will inevitably produce alongside Black and White in order to wring more money out of us.  Aside from the correspondence of their type combinations (Zekrom is Dragon/Electric, Reshiram is Dragon/Fire and Kyurem is Dragon/Ice), Kyurem learns many of the same attacks at the same levels as Zekrom and Reshiram, and, as you can see, is grey, halfway between black and white.  However, Kyurem is weaker overall than the other two dragons and doesn’t have a powerful signature move comparable to their Blue Flare and Bolt Strike attacks (no, Glaciate does not count).  If he is the final member of this hypothetical trio then there’s something wrong with him; like I said, he seems to be more than a little unwell.  If Kyurem does turn out to be the mascot of “Pokémon Grey Version,” his fans are hoping he’ll be upgraded somehow when that game is made, much as Giratina was when Platinum was released, and this seems more than likely (though how much more powerful he’ll become is very much up for debate). 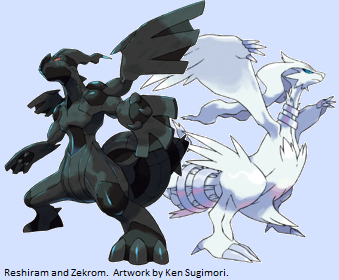 So, if Zekrom and Reshiram represent yin and yang, calm and vibrant, night and day, how does Kyurem fit in?  Why is he weaker than they are?  Just what is his deal, anyway?  Well, the basic idea of the yin-yang concept is that opposites cannot exist in isolation (hills can’t exist without valleys, you need a source of light to cast a shadow, and so on) and bring each other into being simultaneously, or form a cycle.  Pretty much everything is created by the separation and interaction of opposites – which is actually similar to how many physicists think the universe really works; emptiness and nothingness represent a state of equilibrium, and all matter represents a deviation from that equilibrium which can only exist because it is balanced by an equal quantity of antimatter lurking somewhere beyond our perception (it’s not just matter that works like this; forces and energy are brought about by deviations from equilibria as well… but this is a Pokémon blog, and I’m an archaeologist, so let’s not get into that).  So, if Reshiram and Zekrom are yin and yang (or matter and antimatter, if you prefer), Kyurem represents wuji, the equilibrium state we’re left with when they cancel each other out.  What does this mean for Kyurem in terms of his existence as a Pokémon?  A popular theory is that, since we know Reshiram and Zekrom were once a single dragon until they were split apart by the strife between the two ancient heroes of Unova, the weakened, decrepit Kyurem we know might be the shattered corpse of the original being from which they were created.  A particularly tantalising extension of this theory is that the plot of the third game could culminate with Zekrom and Reshiram being absorbed into Kyurem, restoring the form and power of the original dragon.  This particular prediction seems, on balance, a little far-fetched to me, but we are still left with the fact that Kyurem is not a match for his counterparts.  Reshiram’s delicate, feminine and birdlike appearance is very deliberate and meant as a contrast to Zekrom’s powerful and dynamic build, so it seems likely to me that, if Kyurem is the completion of a trio, the impression we get from his physical appearance is no less carefully calculated, and that impression is of a fierce, savage, but ultimately diminished or even crippled Pokémon.  The conclusion I have arrived at in the course of my research for this entry is that, while Kyurem as we know him represents the nothingness when yin and yang cancel out, the widely-anticipated restored Kyurem will be symbolic of the potential inherent in wuji, the possibility of unbalancing the equation, the blank canvas of a world without yin and yang.  It’s all up in the air until Game Freak get around to making Grey, though, so do give the matter some thought for yourself – this is quite a fun topic for speculation.

Right, well, I’ve been nattering about Kyurem’s mysterious origin and nature for so long I’ve almost run out of time to talk about what he actually does, so I’ll be as brief as I can.  Dragon/Fire is a wonderful combination because those two elements together kill everything.  Dragon/Electric is less wonderful but still strong.  Dragon/Ice isn’t actually bad, those are both powerful elements, but one of the big draws of Ice attacks is that they beat Dragon-types, which is something Dragon attacks do anyway, while the only type that resists Dragon attacks is Steel, which resists Ice as well.  Defensively Ice is just about the only thing that’s bad enough to make Dragon lose its lustre in combination.  Compared to Reshiram and Zekrom, Kyurem pretty much got shafted with respect to his type as well as his slightly lower raw numbers.  His signature move, Glaciate, is situational; it’s far too weak to be his primary attack, but its side-effect of slowing down anything it hits can be useful.  The sad thing is that if Glaciate were maybe 25% stronger it would be an excellent technique.  There are two other attacks, Freeze Shock and Ice Burn, which exist in the game’s coding but which no Pokémon can learn (including Kyurem); these moves seem to be related to Zekrom and Reshiram, and may become Kyurem’s signature moves in Grey, but those have problems of their own that I won’t get into.  Of course, as you’re probably all tired of hearing me say by now, “Kyurem is still a legendary Pokémon.”  He’s fairly fast, very tough and ridiculously powerful.  He has access to the two Dragon-type staples, Draco Meteor and Outrage, and isn’t afraid to use them to inflict massive damage on just about anything.  He has Focus Blast to defeat Steel-types and powerful Ice attacks to deal with everything else.  It’s a shame Kyurem’s physical attacks are so much less varied than his special attacks (he basically has Dragon attacks and Stone Edge; apparently Ice Punch or Icicle Crash was out of the question), because he has the stats to use either well; still, with a unique type, a balance between physical and special attacks that is unusual amongst legendary Pokémon, and a signature move that’s depressingly situational but still a lot less dumb than Techno Blast, Kyurem is a lot of fun to use.

Well, at this point the million-dollar question has to be: what’s my verdict on the last Pokémon of the new generation?  As I’ve said time and again, I don’t care whether a legendary Pokémon is strong.  I know legendary Pokémon are strong; honestly, it takes a lot of work to screw one up (he says with a meaningful glare at Regigigas).  What I care about is their story and how that story fits in with the Pokémon world as a whole… and the thing about Kyurem is that his story hasn’t been written yet.  The nature of Kyurem’s relationship with Reshiram and Zekrom could be hugely interesting, and if it’s done cleverly it could make us see the original story of Black and White in a whole new light.  Alternatively it could be a massive cop-out.  I wouldn’t like to place a bet on this one (though I am quietly optimistic).  I like where I think they’re going with this, but until I actually see it…

I hereby scribble a wavy line and a question mark under this Pokémon’s right to exist!

(That… doesn’t have quite the same ring to it, does it?)